Enter numbers from the dialpad during an interaction

Enter numbers that automated call systems recognize, such as an account number…

After-call work (ACW) is time after an interaction disconnects. Agents use this…

Agents specify wrap-up codes to indicate the purpose or outcome of an interaction.…

Email interactions enable agents to receive and reply to customer email messages. Depending…

When agents go to accept new interactions, the Interactions panel opens. When they…

Add a note for an organization

Edit a note for an organization

Enter notes for an interaction

The note history for the interaction appears in the Notes window. 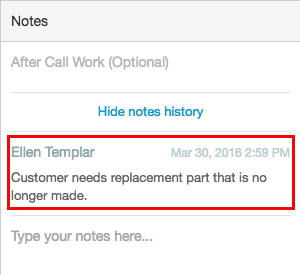 Enter any new notes in the Type your notes here… field.