About the PureCloud embedded clients

Note: This article applies to PureCloud for Zendesk. After you install PureCloud…

Search in PureCloud for Zendesk

Note: This article applies to PureCloud for Zendesk. By default, when you…

Note: This article applies to PureCloud for Salesforce. By default, when agents…

About the PureCloud browser extensions

About PureCloud for Zendesk

Why do my calls get sent to voicemail when I am in certain statuses?

To prevent interruptions, PureCloud sends your calls to voicemail if you are…

To prevent agents from using a secondary status, deactivate it. You can…

Other people see your primary status, not your secondary status. The following example shows that the primary status is visible during a transfer.

Note: The People and Queues buttons appear by default. However, your administrator can configure whether the buttons appear or not. The Consult button does not appear for chat, email, message, and ACD voicemail interactions. 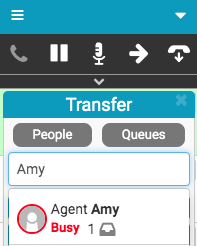 For more information, see Client interface, Change your status, and Out of adherence.