Note: This feature is not supported on Windows 7.

Contact center managers and supervisors can record up to four monitors with 4k resolution during an ACD interaction.

Genesys Cloud records each monitor as an individual recording and preserves the monitor orientation.

Recording of more than a single monitor counts as only one session toward the concurrent session limit. There is a maximum of 2000 sessions.

To see a monitor in focused view, select the screen you want to enlarge. The other monitors continue to display to the right side. To select a different monitor, click the wanted monitor. 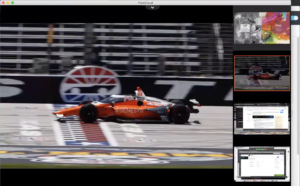 on the bottom of the screen.

When you download screen recordings that include multiple monitors, all available recordings are included in the download. You can download and export recordings using Genesys Cloud. The screens are each downloaded as a separate .webm file.