In Architect, flow authors can only assign values of “like” types. A string variable can only have a string value assignment. But the Architect parser evaluates the data type of each expression and, if possible, reconciles the results for the flow author through an implicit cast.

In the following example, the flow author wants the integer to be expressed as a string. At runtime, the expression results in the string “5”.

This is an example of an explicit cast where the expression author is converting the integer value to 5 to a string by adding a ToString function call and passing in the integer. The resulting value of this expression when evaluated at runtime will be “5”.

This expression is considered an explicit cast. The flow author directed the parser to convert the integer to a string. Implicit cast happens only on the resulting type of expression text entered.

A flow author can also enter this valid string expression:

When Architect performs an implicit cast, it returns a message with conversion details on the expression’s Edit Expression dialog box.

Implicit casts are only performed on type cast functions that take one parameter. Type cast functions with multiple allowed parameters are not candidates for implicit conversion because the parser cannot process the action on any parameter  after the first one.

In the previous example, we knew the result would be an integer value of 7. But consider an example when we do not know what the value will be at design time:

When the parser evaluates the expression, it interprets that the resulting type is not a string but the result of the expression text is an integer. Therefore, it adds the ToString as an implicit cast and converts the result into a string which, is the desired result.

The parser only performs an implicit cast if the result is a valid expression. But let’s consider an example where the result is invalid. We know that, in the initial release, Architect only supports runtime data playback for three languages: en-US, fr-CA, and es-US. Therefore, the following expression works if the flow runs in en-US, fr-CA, or es-US:

Architect can express the number 5005 any of the three languages. But what if a flow author adds Czech Republic (cs-CZ) as a supported language, which is not one of the 3 languages that includes runtime data playback support? The following examples illustrate how Architect handles invalid expressions.

When the flow author begins to type the integer, Architect immediately returns an error message: 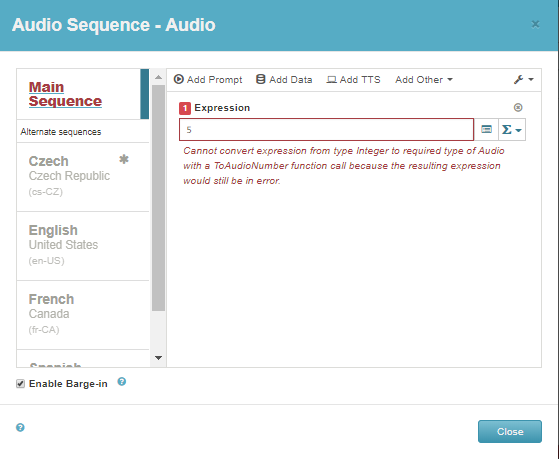 If the flow author adds the ToAudioNumber function as an explicit cast, Architect still returns an error: 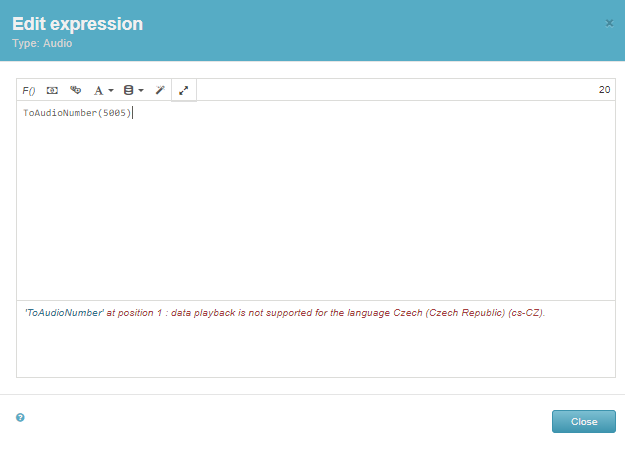